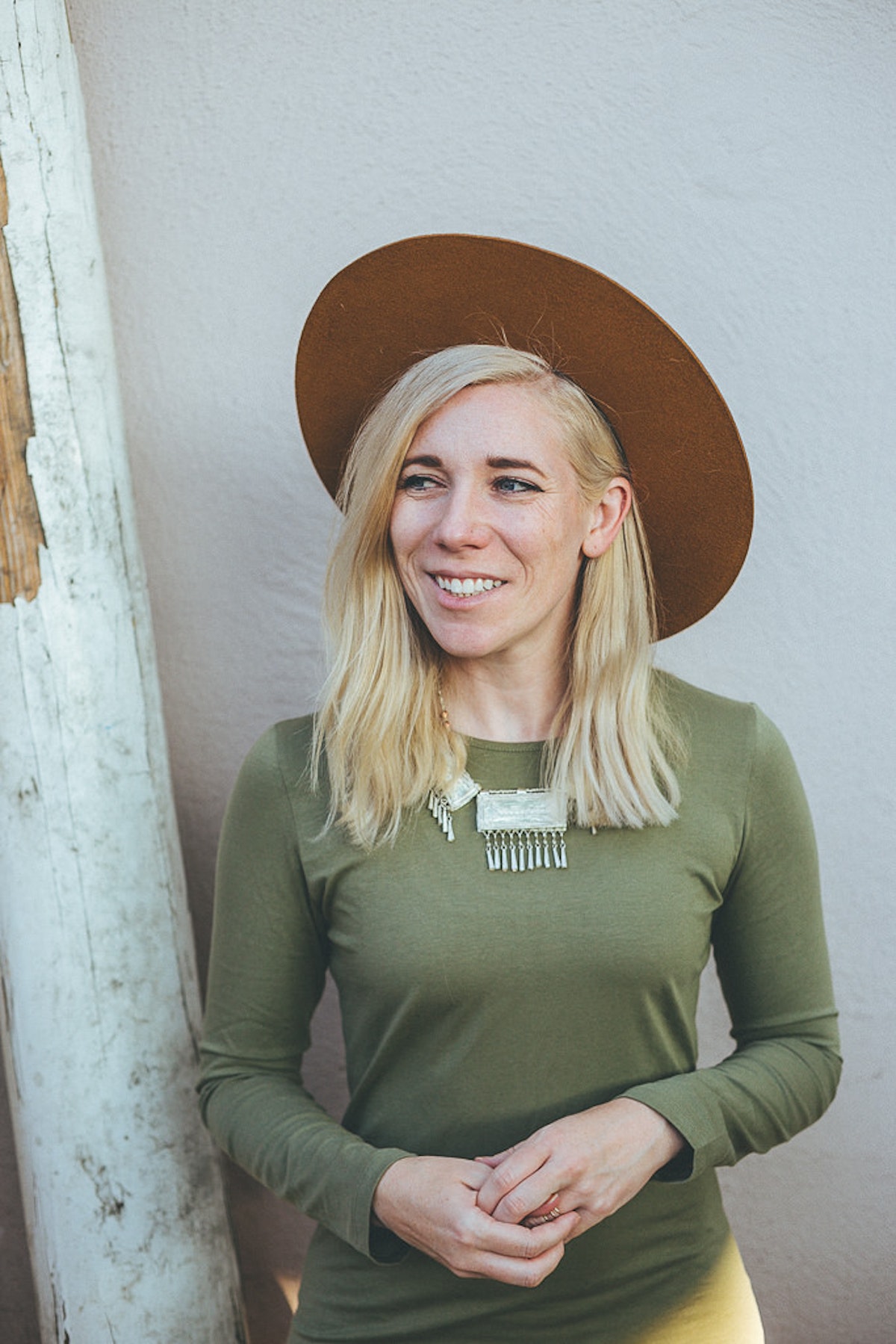 Perhaps you’ve seen a flood of photos on social media during the month of December of your friends wearing dresses – daily. Perhaps you’ve participated in Dressember yourself, or perhaps you’ve never heard of it and are wondering what this magical month is! Regardless of how much you know about the Dressember Foundation, or its founder, there is so much more to the story. We’re so excited to have one of our 2019 Yellow Conference speakers and Dressember Founder, Blythe Hill, on the blog today to share more about how they approach tackling a social issue as heavy as human trafficking, how aligning her values with the work she does has evolved over time, and her hopes for the future of Dressember.

Tell us a little bit about the Dressember Foundation, and what sparked you to start it.

The Dressember Foundation is an anti human trafficking nonprofit organization, but really it is a movement – a collective of people across the world who are passionate about ending modern day slavery in all its forms. We hold an annual campaign where thousands of men and women commit to wearing either dresses or ties every day during the month of December as a way to raise awareness and funding for anti-trafficking programs. In six years, we’ve raised roughly $7.5 million USD.

I started Dressember initially as a college student, and it was just a personal style challenge, without any cause or campaign element to it. Within a couple years, it was catching on and people I didn’t know personally were finding out about it from friends or bloggers and wanting to join in. I started to dream about what more it could be and, because I had been passionate about the fight against human trafficking for years, decided to align Dressember with anti-trafficking. I had no idea if it would work – whether people would donate to a fashion-based campaign (many successful peer to peer campaigns are athletic, and here we were, not running a marathon but simply getting dressed). I set what felt like a huge, lofty goal to raise $25,000. We hit my lofty goal on day three and proceeded to raise $165,000 in December 2013. Since then, it’s snowballed; we have advocates and donors on six continents, and we’ve raised millions of dollars toward the fight to eradicate slavery domestically and internationally.

In working toward dismantling an issue as heavy as human trafficking, how have you been able to share the story of the work you do in a way that both honors the weight of the issue and fosters hope that points people toward taking action?

Trafficking is a really heavy topic, and one that not everyone wants to talk about. This is true for me in my conversations, and it’s true for our advocates as they raise money and awareness. What I love about Dressember is that it is this really disarming approach to a really horrific issue; it addresses something really heavy and overwhelming in a way that is light and fun, and non-threatening. We provide our advocates with statistics, stories, and a language to spread accurate information about trafficking, and because of the nature of the campaign, they get to do it in a way that allows them to shift between the heavy reality and the importance of small, everyday action – action that can even be fun and easy. We don’t believe in leading the conversation with guilt or motivating people to be involved out of desperation or even urgency.

It’s tempting to feel overwhelmed or even despair about slavery, but the truth is that there is so much hope in this fight.

The programs we are funding are increasing the rate of interception, increasing convictions of traffickers, and training and restoring law enforcement and criminal justice systems internationally, deterring would-be traffickers and protecting those most vulnerable to trafficking. This is an issue we can end in our lifetime; we just need to scale up programs that have proven to be successful.

What times of transition in your life have proved most important to get you where you are now?

College and transitioning out of college were both important times for me. Looking back, it was an incredibly frustrating season - I felt I had so much passion and so much to give, but not much to prove it. I also didn’t have a specific vision or path I wanted to pursue. I was passionate about anti-trafficking, but felt totally unqualified to engage in the fight. I started Dressember while I was in grad school, and it’s still amazing to me that something I created out of boredom took on this life of its own and has become a global community of people who, like me, have felt passionate but powerless.

Can you share about a moment in which you took action to align your values with the work that you do? Did that come with any sacrifices?

When I first aligned Dressember with anti-trafficking (in 2013), I had no idea about the overlap between slavery and the apparel industry. Someone wrote us on Twitter to point out, in a rather kind way, that if we aren’t encouraging our community to wear ethically produced dresses during the campaign, there is an unfortunate irony behind our movement. That was a game changing moment for me: I had to completely change the way I shop, and the things I value in what I purchase. I began taking baby steps: first eliminating fast fashion brands, then slowly moving toward second hand/vintage clothing, and toward buying fair trade and ethically made items. It’s changed my relationship with clothing; instead of viewing clothing as disposable and pursuing trends as they come and go, I buy less and try to only buy items that will last several years. We’ve also built ethical fashion education into our Dressember messaging and resources to gently guide our community toward viewing their purchasing power in a new way.

What has been your greatest struggle in growing the Dressember Foundation?

The first couple years were thrilling: Dressember grew so much, and so fast. The movement is still growing, but the rate of growth has slowed down a bit.

I think the struggle in this work - and in any social good work - is staying in the game even when things aren’t exciting.

This work is a labor of love for me; if I were doing it just when I felt like it or when it was exciting and energizing, I would have quit a long time ago. I’m lucky now to have an incredible team of staff, volunteers, interns, and contractors who help keep Dressember moving and growing - in the early days it was just me and an accountant! It’s amazing what a solid team has done to help Dressember mature and evolve.

What has been your proudest moment to date as a founder?

I was able to give a TEDx talk in 2015; that still stands out in my mind as a huge milestone and accomplishment. TED is a huge platform, and having that talk under my belt has opened other doors to share about the Dressember story and mission.

I also feel so proud of my staff! I am currently out on maternity leave and I can’t tell you how much it means to not worry for one second that my team is capable to handle everything while I’m out. After working basically alone for four years, I don’t take the fact that I have such an incredible and capable team for granted.

Who has impacted your life in a profound way?

There have been so many people who have impacted me and helped me as I carve my own path, but there is one person who has been the most significant: my best friend and my husband, Jordan Sabolick. Jordan has taught me what it means to love; to stay in the fight even when things are difficult. He’s modeled empathy and patience for me even as I’ve broken his heart. He’s shown me what it means to live a life led by joy and punctuated with hope; he is one of the most joyful, optimistic people I know. He is encouraging to a fault, my number one cheerleader, and makes me feel special and beautiful even when I’m at my lowest. Dressember wouldn’t exist without him.

What are your hopes for the future of Dressember?

I’d love to see the Dressember community continue to grow, and to see our impact grow along with it. There is the tangible impact we can make through programmatic funding, awareness, and education, and the intangible impact of spreading dignity to women worldwide, and dismantling systemic misogyny in all its forms.

My ultimate goal is to see an end to trafficking, and to create a world where every woman and girl is convinced of her worth, and free to live a vibrant, autonomous life physically, spiritually, emotionally, and mentally.

What are you most looking forward to sharing at the Yellow Conference as a speaker?

I’ve attended the Yellow Conference for the past two years, and am honored to take the stage and get a chance to share my story and what I’ve learned along the way. I’m excited to share how Dressember started, and hope my story inspires others to use their unique gifts to engage in their passions and build a more socially just world.

Super Practical & Effective Tips to Empower Your Employees (Rather Than Micromanage)

3 Simple Steps to Declutter Your Home into a Haven