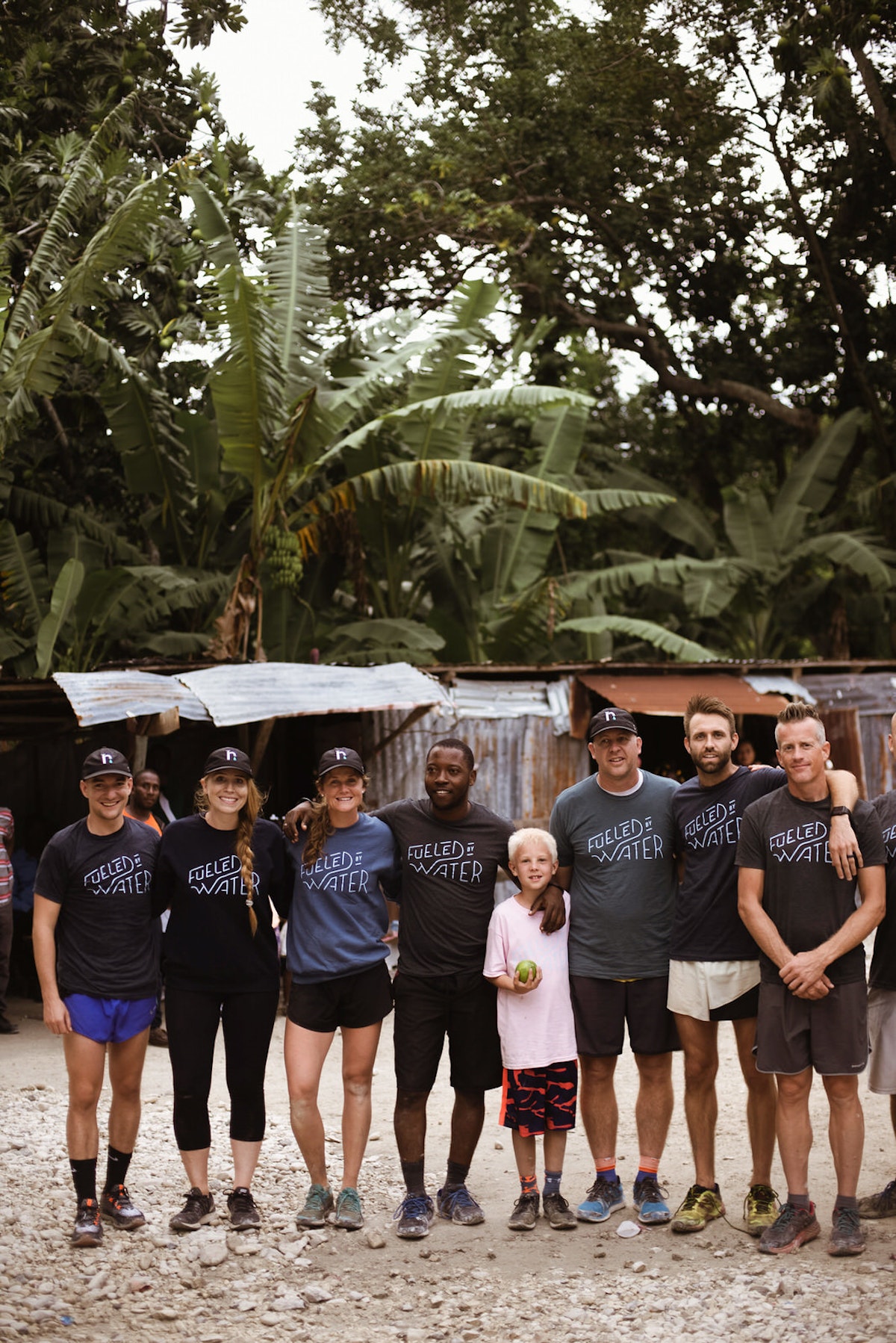 Two days ago I was driving in a truck through Haiti, fording rivers and navigating the bumpiest roads I’ve ever driven on as my group trailed Bryce Matteson of Run 5050 while he ran what has to be one of the most challenging marathons ever run – all for the purpose of raising awareness and funds for clean water. As he ran, we passed through villages and towns, where locals wandered out to watch us and ask, “Kisa w’ap fè?!” (What are you doing?!)

It’s a question I have been asked over and over in the last few weeks, as I prepared to take Yellow Co. to Haiti on a trip hosted by Healing Waters International and Bonfire, with the mission of raising awareness and money to bring a clean water project to a community in Haiti.

Run5050 teamed up with Bonfire to create custom ”Fueled by Water” t-shirts, sweatshirts & tanks so YOU can get involved too (without having to run a marathon)! Each organization there was committed to the goal of selling 1,000 shirts, which would fully fund building a filtration system that provides clean water to an ENTIRE COMMUNITY!

According to the UN, no other single intervention is more likely to have a significant impact on global poverty than the provision of clean water.

I’d never given a lot of thought about the well known statistic that 1.8 billion people in the world only have access to dirty drinking water. It’s one of those horrifying realities that doesn’t compute — not really — until you come into a community and walk (or run) in someone else’s shoes for a few days.

As I prepared to go, I learned that Healing Waters is unique in the way that it empowers and trains natives of the countries they bring clean water to. Each project is staffed and maintained by people who understand the needs of the community better than any well-meaning outsider could. They are also unique in that they only build clean water projects in communities who are willing to partner and invest in them, which means that each facility is maintained with the precision and care that only comes when the people responsible have full ownership over it.

Once we arrived, I learned even more about the reality of this issue. I watched women and children fill empty jugs and cartons with water sourced from the same canals I saw trash floating in, pigs rooting through, people bathing in, and laundry being washed in. As we drove through the rain on muddy mountain roads only to still see women finishing their daily 5 hour hike to bring water home, those statistics started to sink in.

In a community where the average person spends large chunks of their day hauling in water that will probably make them sick, they will not have the luxury of dedicating time to education, health, business, or relationships.

When all of your energy is focused on survival, anything outside of surviving becomes a luxury you can’t afford.

Healing Waters and Run 5050 believe that when you don’t have clean water, you are locked into a cycle of poverty that few can break out of. You are stripped of your health, dignity, and opportunity. Kids who should be in school are kept uneducated. Communities that could be thriving are struck by bouts of cholera and dysentery. Economies that should be providing stable infrastructure are left stagnant.

It was a beautiful thing to be able to support Bryce as he ran his 38th marathon of the year in Haiti. The race finished in the Marsieux — the hometown of our friend Wesley, Healing Water’s Country Director in Haiti, and the location we are raising funds to provide clean water for. The entire town came out to celebrate, and our team came together with new friends in the village as we ate together and listed to the town elders share their stories. They told us the plans the town has for after they have access to clean water, and how they can shift their focus away from surviving and towards building a better life in their town.

It had taken us over six hours to drive the relatively short distance to Marsieux, which is not considered remote. As we drove late into the night to return to our hotel, Wesley told us about how as a child, he and his brother had to carry his sick aunt 20 miles through the mountains to the nearest medical facility because she was sick from the dirty water. When we asked why this job was given to two children, the answer was simple: no one else could be spared from the important work of hauling in water.

His story reminded me that it’s not enough for a community to just survive — we should all have the opportunity to thrive.

The people I met in Haiti are just like me. They have their own passions, senses of humor, dreams, and fears. I want them to thrive — to physically, mentally, socially, and spiritually be free to pursue the things that make them light up inside!

It’s so easy to make an impact and provide clean water for these communities, and I was so proud to bring Yellow Co. into a problem that does have a solution – one that we intend to be a part of solving. I would encourage anyone who feels called to being a part of solving the global water crisis to partner with Healing Waters initiative by buying a shirt!

5 Ways to Make Your Website Stand out & Grow Your Business

Curious About CBD Oil? 3 Questions to Ask Before Buying