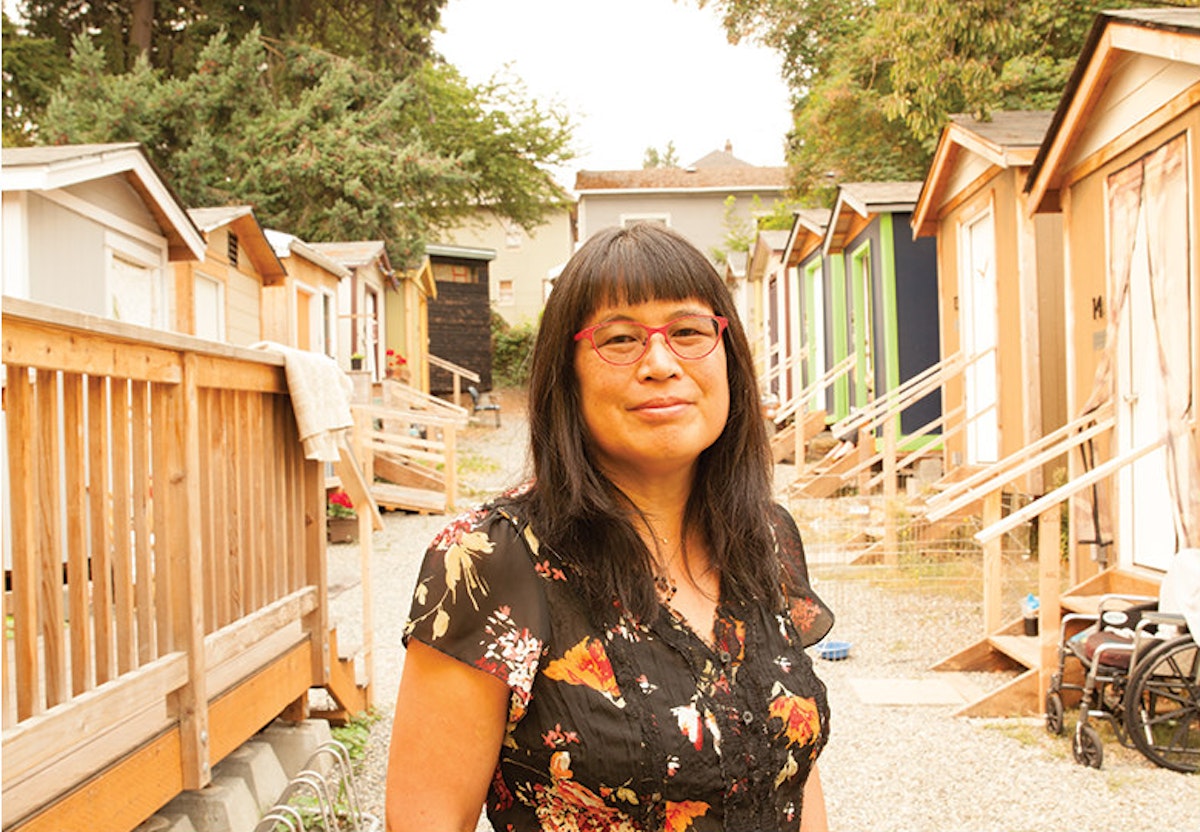 In major cities, homelessness is an issue growing continually more rampant - and the solutions, often not immediate enough. Sharon Lee, the Founding Executive Director of The Low Income Housing Institute, has a fire within her to change this. Her nonprofit builds tiny houses for the most vulnerable in the Seattle community, offering them a safe, stable, empowering place to live. Read more about the incredible work LIHI does in our interview with Sharon below!

Tell us a bit about your background and the work you do at LIHI.

I have this amazing job where my staff and I provide great places for people to live. The Low Income Housing Institute is a nonprofit organization based in Seattle that serves families, singles, seniors, homeless people and those living with disabilities who cannot afford housing on the private market. I am the founding Executive Director of LIHI, which was established in 1991.

I have a background in architecture and city planning. I completed my undergraduate work at University of Pennsylvania and graduate studies at M.I.T. I worked at various jobs in the public and private sector before deciding to start a new nonprofit organization.

I wanted to develop innovative solutions focused on people who are most vulnerable and in need of affordable housing.

Recently, LIHI created a tiny house village designated exclusively for women, that was built by women. In what ways is this project empowering and equipping the women now able to live in those homes?

Seattle has the third largest homeless population of any large city. We are right behind NYC and Los Angeles. There are 12,000 homeless men, women, and children, over half of whom are unsheltered. We know it takes three to four years to develop and construct a new apartment building from scratch. Women living on the street cannot find adequate shelter and are at-risk of physical violence, getting killed, being sexually assaulted, or dying from exposure. They cannot wait years for affordable housing to get built: they need help and placement immediately. In 2017, 169 homeless women and men died on the streets. No one should die from being homeless.

Tiny houses are a short-term solution that can save the lives of hundreds of women.

At our women-only Whittier Heights Village, women can lock their door, keep their belongings, and stay warm and dry as the tiny houses have heat, insulation, and electricity. Women support each other in a village-like setting. A kitchen, community space, toilets, and showers are all on-site. LIHI provides social workers to help women find long-term housing, employment, and connection to services.

LIHI has grown to now have over 2,000 housing units in the Seattle area, which is incredible! What has been key in this growth process?

In our business plan we decided we had to grow rapidly in order to survive any downturn due to the economy, real estate cycles, or the ever looming federal budget cuts to low-income housing. We knew we had to grow quickly to have 500 apartment units under ownership and management and then to 1,000 units to achieve economies of scale and efficiency.

Developing and managing real estate can be a really tough business. There are lots of regulations, risks, and complexity. Of course, Seattle is right up there with San Francisco, Los Angeles, Boston, and New York in terms of escalating rents, gentrification, and displacement of low income people from their neighborhoods. LIHI excels in finding real estate to buy that has not been listed yet, and we are persistent in getting our housing financed. We do not take “no” for an answer - especially when we know there are hundreds of homeless families, women, and young adults (age 18-24) who are struggling to survive unsheltered on the streets of Seattle.

This month at Yellow, we’re focusing on Ability; recognizing both our potential to learn new skills, as well as our capability to uniquely impact the world with our individual strengths. Which of your abilities have you leaned on to make the meaningful work you’re doing come to life?

As an Asian-American woman, I encounter both subtle and overt racism and sexism. I am okay with not being liked and I am proud of being “different,” so I have no qualms of being a strong and vocal advocate for low-income and homeless people, women, and people of color. I know that politicians can change their positions when times get tough. In terms of Ability, I focus on persistence and perseverance. By now, people know I don’t give up. I like it when elected officials state they cannot say “no” to me, so they might as well say “yes” now.

Construction work is a trade not often associated with or entrusted to women. Have there been any moments during your work at LIHI where you have seen women realize their potential and ability to be a part of building these houses that they had never before seen?

It was truly extraordinary to see women in the trades turn out to build the tiny houses at Whittier Heights Village for homeless women. It was not just female carpenters, but also female electricians, plumbers, arborists, roofers, painters, architects, engineers, artists, doctors, and other occupations. The Women4Women effort was unique. At LIHI, we have trained and hired hundreds of women in the real estate development professions such as housing developers, housing finance specialists, construction project managers, asset managers, housing preservation experts, brokers, architects, landscape architects, real estate attorneys, engineers and environmental experts.

What is your favorite part of the work you do at LIHI?

The staff at LIHI has grown to 180 people, which means more of my time is spent on management and organizational issues. I really like two areas of my job. The first is finding well-located and attractive properties to purchase for affordable housing. I look for sites close to good schools, transit, employment, shopping, and amenities. The second is the incredible reward of seeing homeless families and individuals move into their new home or tiny house.

Housing is fundamental. It provides a foundation for people to build their futures.

Are there any books, tools, or resources that have impacted you recently?

Playwright August Wilson who lived in Seattle for some time is a constant guide. He is often called “The American Shakespeare”. “Confront the dark parts of yourself and work to banish them with illumination and forgiveness. Your willingness to wrestle with your demons will cause your angels to sing.” - August Wilson

If you could say one thing to any woman struggling with feeling capable of taking on the work they dream to do, or changes they wish to make in the world, what would you tell them?

Reaching one’s potential or making change in the world may not be a straight path. Expect zigs and zags and please take a Zen approach. Take time for self-care and reflection. A great idea or insight can happen when you least expect it.

What is your greatest hope for the future of LIHI?

My greatest hope is that not one more person will die from being homeless on the streets of Seattle. If LIHI and other housing groups can build enough tiny houses and affordable apartments, dying from homelessness can be a thing of the past.

3 Steps to Strengthen Your Team & Thrive at Work

How Uniting Blooms: A Poem on Our Need to Belong