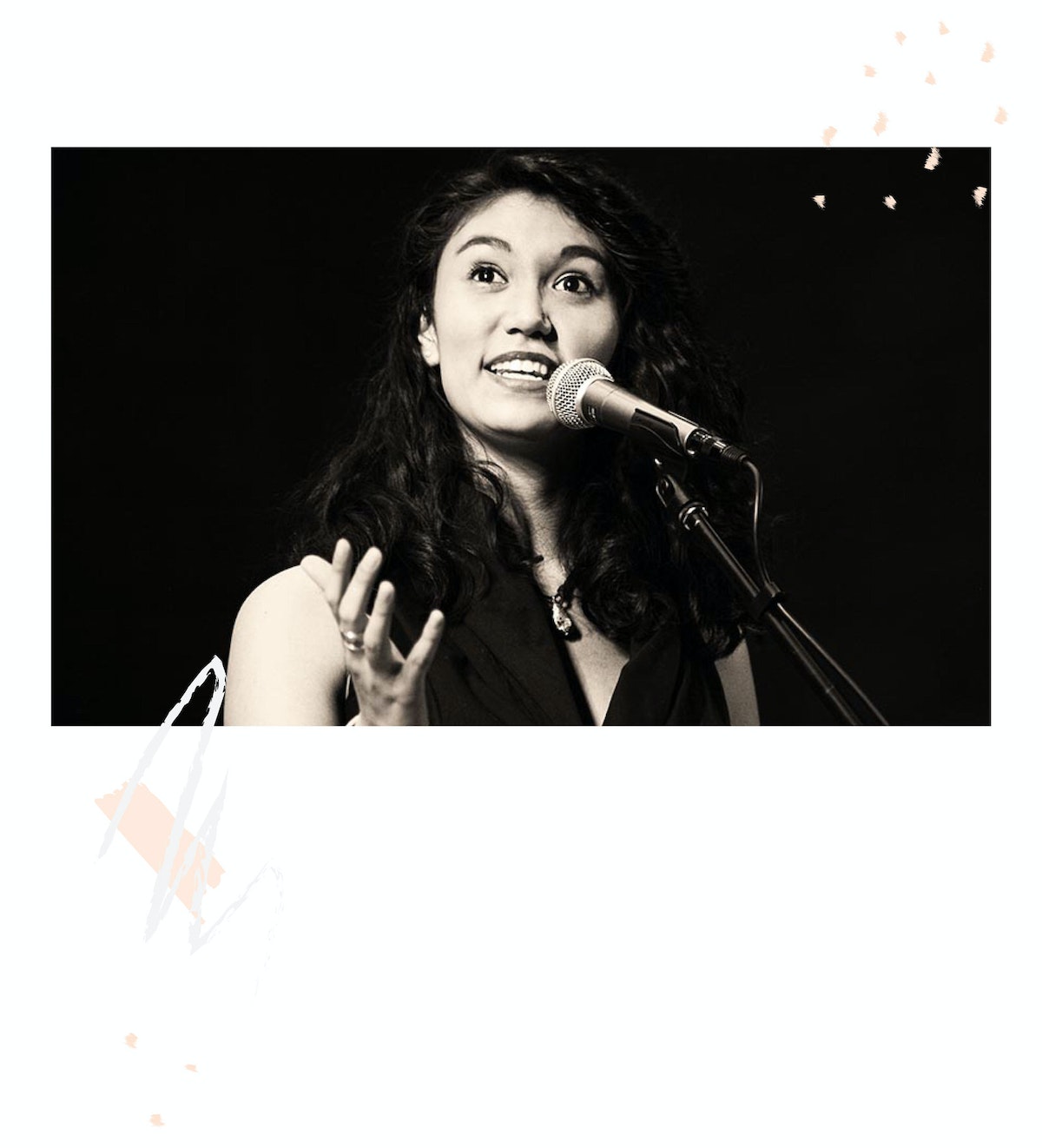 I’ve heard it once said that story is currency. Humor might not always translate, culture might not always transfer but story - story is the rich collection of human experience. There is a reason we are fascinated by the stripped down, behind the scenes, walls-come-down kind of vulnerability that story brings. As a result, it becomes increasingly imperative that we pay attention to the stories that we surround ourselves with.

The stories that usually compel me most are not the ones that are from top-to-bottom exactly like mine, but maybe the ones that push the boundaries of what I know or am familiar with, yet still challenge me to find the relatability and humanness that exists in someone else’s voice. In sitting up and leaning in to hear another’s radically unique and personal story, we feel the unraveling.

Stories have the potency to reveal commonalities, elevate empathy, and narrow the chasms between us.

Whether it’s through song, testimony, poetry, picture, or movement, our individual interpretations of this life push light into the dark places. And slowly but surely, we can lend our eyes and hearts to each other when we recognize that seeing merely through our own lens will not do. With nearly 8 billion people orbiting the sun alongside you, don’t you wonder at the multitude of stories that exist between us and around us, waiting to be shared, waiting to bond us together?

From birth to old age, stories compound and pulsate within us; few can argue with the truth that stories are worth sharing. Here is a list (though far from exhaustive) of some of my favorite story-tellers, truth-revealers, and light-bringers.

Sarah Kay has been my favorite spoken word artist for years. An incredibly gifted poet, the New York native travels the world performing, speaking and teaching on the value of poetry to elementary schoolers and adults alike. She was 14 when she first started sharing her poetry at the Bowery Poetry Club in East Village and has since taken her poems to spaces such as the Lincoln Center, the United Nations, and even right to the TED Conference stage in 2011 (the last of which you can watch here to add to the already garnered 11 million plus views!). Some of her poems, including “B (If I Should Have a Daughter),” “Hiroshima,” and “The Type” will grip you and center you, elevating heart and soul before all else. May we not ever forget the beauty of the world around us, poetry unraveling before our eyes - “because,” as Kay says, “there’s nothing more beautiful than the way the ocean refuses to stop kissing the shoreline, no matter how many times it’s sent away.”

Dan Fogelman is the brilliant head writer and producer of some of your favorite television shows and movies, including This Is Us, Tangled, and Crazy Stupid Love. If you don’t like shows or movies with themes that hit you right in your gut or leave your cheeks tear-stained from the ugly cry, then maybe Fogelman isn’t the guy for you. And Jason Katims would be of no help to you either. Katims is best known for creating hit shows like Parenthood and Friday Night Lights, which both absolutely changed my life (hyperbole noted). But listen - both Fogelman and Katims are truth-tellers, made evident in the scenarios and seasons they write for their characters, thus honoring the real human experiences of their audiences. Prejudice, racial tension, foster care, adoption, insecurity, adolescence, love, heartbreak, growing up, marriage, parenting, leaning in, letting go - their shows cover it all. I just can’t get enough of these two and their wonderfully poignant way of capturing life vividly and authentically.

One minute into listening to Eryn Allen Kane sing for the first time, I was immediately confused as to how she at one point considered stopping her career. Now you might recognize her smooth crooning on Chance the Rapper’s Coloring Book track, “Finish Line / Drown” or featured accompanying Thirdstory in their newly released acoustic video for their song, “Still in Love.” But there was a time after college when Kane wasn’t sure exactly how she felt about continuing on with music, so she spent a summer in Australia to gain clarity and direction. What followed was a phone call and invitation from the legend, Prince himself, asking her to sing on a song with him. Kane’s talent is undeniable, but what sets her apart is the way she writes and sings with this raw response to the world she sees around her, whether that’s the outcry and prayer of “Have Mercy” or the charged and bone-rattling depth of “How Many Times.”

I can count the heroes in my life on one hand and Lin-Manuel Miranda is easily one of them. He is the heart-melting genius behind In the Heights, Moana, and the game-changing musical you can only afford to see in your dreams: Hamilton. But more than revolutionizing the theatre scene and frankly, the world with his work, the Pulitzer Prize winner is also an activist and perpetuator of good, specifically in the wake of the Hurricane Maria’s devastating aftermath in Puerto Rico. Perhaps one of the most prolific writers of our time, Miranda’s beautiful mind spills into stories and song with a vibrancy and buoyancy for life that connects and welds together generations, cultures, genres, and hearts. Follow him on Twitter @Lin_Manuel to see how he actually does write and create like he’s running out of time but truth is, we’re all better for it and all the more inspired as a result.

Many first became familiar with Mindy Kaling as she starred in the American-adapted hit show, The Office, as spitfire Kelly Kapoor. Kaling was also responsible for writing near 22 episodes for the show’s entire run, along with a couple directing credits as well. She went on to create, produce, write and star in her own sitcom, The Mindy Project, which was one of the first times if not the first time I had ever seen an Indian-American woman pioneer such a project with hilarity, excellence and great success. I’ve read both of her New York Times best-selling memoirs, which are both delightful snapshots and mementos of the road traversed by a woman of color forging her own path in Hollywood. Representation matters and it’s like water to my soul seeing a strong female comedian person of color calling shots and making magic. Her projects now include starring in director Ava Duvernay’s A Wrinkle in Time currently out in theatres, along with creating a brand new show on NBC, Champions, which features a radically diverse cast with an affinity for musical theatre (these are a few of my favorite things).

Justin Paul and Benj Pasek are Golden Globe, Tony, Grammy, and Academy Award winners. Need I say more? These two are unstoppable. The pair hail as graduates from the University of Michigan, where they met and began composing music together as freshman. From the romantic-comedy musical, La La Land, to the tear-jerker, earth-shattering hit musical, Dear Evan Hansen, and now the certified platinum soundtrack for The Greatest Showman, these two have an uncanny ability to transform story into song in ways that so effortlessly elevate emotion and gets everyone in the room singing at the top of their lungs. Next to come from these guys are songs for the live-action adaptations for Disney classics such as Aladdin and Snow White and the Seven Dwarfs, and to say I’m excited is an understatement.

This sweet trio of sisters from Portland, Oregon has music in their blood and hope in their lungs. Natalie Closner Schepman and her two younger twin sisters, Meegan and Allison Closner, are contributing something revitalizing and empowering to the music scene. With perfectly pitched harmonies for days, it is no wonder that they have already toured with James Bay as an opening act, been featured as a Spotify Spotlight Artist, as well as performed on The Tonight Show with Jimmy Fallon and NPR’s Tiny Desk Concerts. The songs they write are more than just catchy and well-written, they are anthemic. From singing honest reflections about being in the music scene to the gravitational pull of being in a relationship, their lyrics are moving, raw, and honest. In fact, the latter is the title of one of my favorite songs off their sophomore album, I’m Alone, No You’re Not, words ripped straight out of Meegan’s journal as she writes and sings of the (all too familiar) seemingly never-ending battle between the lies that we hear and the truth that we know.

Can't Make It to a Yellow Tour Stop? Livestream Each Pop-Up Conference from Home!