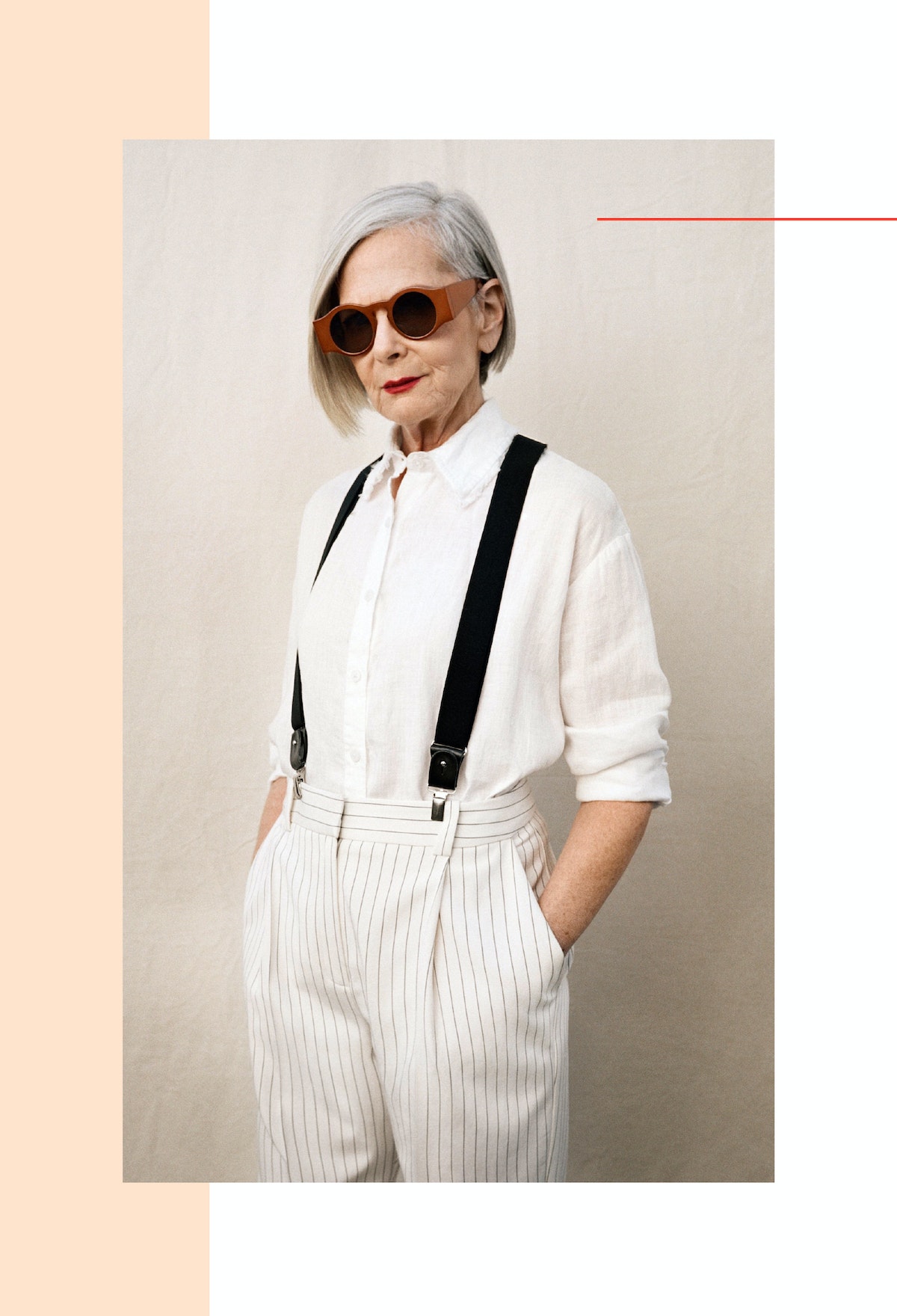 There’s a lot we tend to associate with aging. But one thing often left out of the discussion - personal style. In the realm of fashion, older women haven’t had a history of being very included in the conversation, but over time, we’ve been seeing that change. From bloggers in their sixties becoming style inspiration to twenty-somethings, creative directors of major fashion houses designing well into their seventies, and Instagram accounts dedicated to the style of an older generation, age has become something to covet rather than dread. Below are six women who we look up to for owning their unique style and expressing themselves authentically.

Lyn Slater is a fashion blogger, professor at Fordham University’s Graduate School of Social Service, and model signed to Elite London. After becoming an “accidental icon” by being photographed for the outfits she wore during New York City Fashion Week, Lyn decided to start her blog because she, “was having trouble finding a fashion blog or magazine that offered an urban, modern, intellectual aesthetic but also spoke to women who live what I call ‘interesting but ordinary lives’ in cities.” Her style and work is meant to speak to “the woman who chooses garments and experiences that allow her to be the self she is and the self that is always becoming.”

Rei Kawakubo is a Japanese fashion designer and the founder of fashion label, Comme des Garçons. Since launching the line in 1969, she has become an iconic leader in pushing the boundaries of fashion. In 2017, she was honored at the The Met’s Costume Institute, being the first living designer since 1983 given a solo exhibition of her designs, entitled Rei Kawakubo/Commes des Garçons, Art of the In-Between. She is also the co-founder of cult retail destination, Dover Street Market in London. Rei is known for always donning a uniform of her fringed bob and a black leather motorcycle jacket.

With a passion for style and inspiration stemming from a close friendship with his late grandmother, photographer and author, Ari Seth Cohen, set out to create Advanced Style; a project devoted to “capturing the sartorial savvy of the senior set.” Driven to fill a missing gap, he says, “I noticed a lack of older people in fashion campaigns and street style sites. I wanted to show that you can be stylish, creative, and vital at any age.” In addition to Advanced Style’s very popular Instagram account and blog, this project was turned into both a documentary (that you can stream on Hulu!) and two books, all filled with an incredibly free, eccentric older generation.

Iman is a Somali American model (not to mention - one of the most iconic supermodels in fashion history), actress, and entrepreneur. Over her career, she has walked in runway shows for almost every fashion house, becoming a trail blazer for many models of color who have since followed in her footsteps. Iman continues to be known for her philanthropy, her pioneering work creating a cosmetic line specifically for women of color, and has just graced the cover of this month’s issue of Vogue Arabia.

After a successful career as a stylist, Linda Rodin started her namesake beauty company at the age of 59, focusing on a few simple, natural products. She went against many discouraging voices in this transition; some telling her that such a change in work was simply crazy, others in the beauty industry scoffing at her face oils (then unheard of in the days of oil-free everything). In turn, she set the trend for face oils that leave skin nourished, dewy, and clean. When asked how Rodin came about in an interview with Vogue, she said simply, “I never found something that I really loved. So I decided to make it myself. I just put all the oils together that I like and I mixed it in a cup and here we are.” Aside from her company, Linda is known for having a simple, lighthearted, and altogether fun approach to style - and life.

It seems for as long as we can remember, Iris Apfel has been the queen of eccentric style for older women. Over the course of her life, she completed a stint at Women’s Wear Daily, worked in interior design; taking part in many design restoration projects (including the White House for nine different presidents); and started a textile firm with her husband. It was through their business that she began traveling all over the world and gained her affinity for acquiring a range of non-Western, artisanal clothing pieces that she began wearing to high-society parties. Iris’ life has been captured in a documentary, Iris (that you can stream on Netflix), and earlier this month she released a coffee table book, Iris Apfel: Accidental Icon, full of her stories, musings, and observations on life and style.

Click here to take our 3-minute 2018 reader survey and be entered in our giveaway for a FREE ticket to the 2018 Yellow Conference!