I had been working my booty off trying to make a particular brand partnership happen, when one day I’m casually scrolling through my Instagram feed when there it was- the image that will make you mid-scroll stop. I see a post from a friend of mine that reads, “So happy/excited to have landed an amazing partnership with ‘X’ brand! So awesome!”

Seriously?? How did they do that when I’ve been working my butt off trying to do the exact same thing with zero luck??

After talking with my friend asking them how they did this, I found out they were able to make it happen because they had a friendship with the right person at the company. (Cue face palm).

You’ve probably heard the phrase, “It’s all about who you know” before. And if you’re anything like me, you cringe at this thought. I despise the idea that I have to make friends with the right people in the right positions at the right company in order to get what I want. Something about that feels so icky and fake. I for sure don’t want anyone trying to become my friend just so they can use me. No one wants to be used, nor should they. 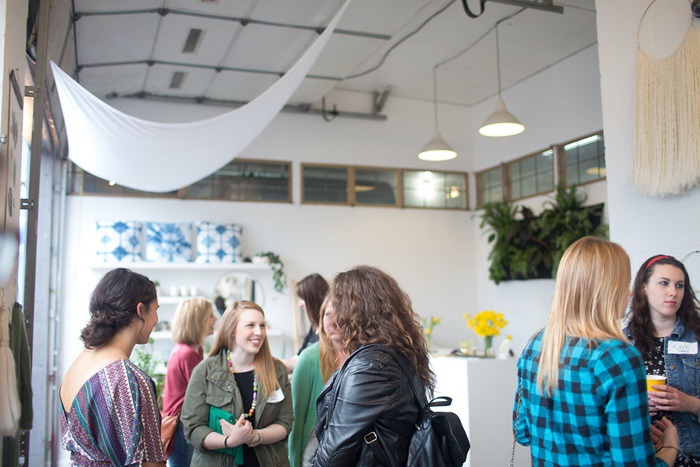 I hate to admit it, but the statement is absolutely true. It IS all about who you know. When you have a friend in a company, it’s way easier to get a job, because they trust you already. Same goes for partnerships, investments, collaborations, etc. Knowing the right people does make it easier to make stuff happen. Whether we like it or not!

So you might be asking yourself right now, “If that’s true, then how do I network, meet the right people and get the right ones to notice my businesses without being fake, in-genuine or a user? I don’t want to be that icky-user person!!” And to that I would say, “I’m SO glad you don’t want to be that icky-user person, the world has enough of those. Let’s talk about how we can be genuine, real people, and view networking in a different light!”

I’m no expert, but I’ll try my best to lead you through what I’ve learned through navigating the “networking” space in a genuine, non-fakey gross way.

Because again, like it or not- networking is necessary.

I never ever want to be the kind of person who only hangs out with people who have “x” happening in their lives or business. I’ve been on the other end of that, and let me tell you- it does not feel good. People are people no matter how many followers they have on Instagram, what kind of clothes they wear or what their business status is. And I think that’s where we need to start. Paaa-leeease ladies and gents. Don’t judge a book by it’s cover. Or their social media following.

You have no idea how awesome this person is.

My husband used to sell music equipment. He always tells this story about how a scruffy looking man wearing an old baseball cap and ripped jeans came in the door one day. No one helped him out because they worked on commission and didn’t think the man would have money to purchase anything. So one of the young, naive new sales employees goes up to him and helps him out. The guy ended up spending more than any single customer had purchased in one transaction for the entire year. The new employee scored a huge commission and the older guys vowed to never stop from helping someone just because of what they looked or dressed like.

It’s a lesson we can all learn from. Be interested in people because everyone is interesting.

You have to see networking as friend-making. Friends help each other out. They trust each other. You have skills, the women you’re networking with have skills. Think about how you can help out the women who you want to network with, instead of having the “what’s in it for me” mentality. Friends aren’t about that ish.

If and when you do have the chance to offer up your skill set - do a darn good job, so you can build trust. You have to prove yourself that you’re worth being friends with and not just taking advantage. You’re awesome and you know how to get a job done. Trust is a huge factor in both relationships and friendships. Build it!

It’s ok to make friends with women who inspire you and could potentially help out your business. I think the icky bad part comes from when you start to treat these people differently than you would treat anyone else, when you compromise your values or hide who you truly are for the sake of being friends with this person. That’s when it starts to get icky and fake- because you’re being icky and fake.

See networking as making friends. Building your tribe of women, and widening your circle. When you stick to being true to yourself and seeing networking as the potential of making new happy hour buddies who inspire each other and help one another out, you’re already half way there.

You become like the people you hang out with. This doesn’t mean ditching old friends, but it does mean investing intentional time in the people who build you up, encourage positivity, bring out the hard working passion in you.

Go to events where you know the women you want to meet will be hanging out (hint hint- Bloom Gatherings anyone??) be brave, go up to them and get their info! It’s like professional dating. Invite them out for drinks, coffee or have a dinner party at your house with the women you want to get to know better. The women you really connect with, be sure to follow up and put in the intentional hang time. Heck- you can even go to networking events together!

Life is so much more than work. Have something in common? Share your interests! Go to the gym together, take your cats on a play date (I’ve still always wanted to do this- any takers?), or hit up your favorite art museum together. If it’s all about work all the time, it’s hard to build a lasting relationship. You’re a multi-dimensional person. Spread your wings and bring others with you!

All in all- keep humanity in mind. We are all humans just trying to make it in this world. Don’t get desperate. Don’t get selfish. You reap what you sow- help others and hope that others will do the same for you! Overall, focus on the mission that you have at hand. Is that mission worth going to events and meeting people who can help you further that mission? If yes, you’re on the right track. If you are going to an event just so you can take a selfie with that famous blogger, you may want to rethink a few things. You’re on a dangerous path to being an icky-fake networker.

We all get selfish at times. We all need to check ourselves. Keep your intentions in the right place and network away ladies! You got this- and your mission / business / goals are worth the effort.

Now go out there and make some power-house lady friends and together lets make this world a better place!!